An examination of damage from Hurricane Earl in Belize

I love social media, I saw pictures of the consequences of Earl, virtually as it was happening. In examining the images, taken by the brave souls in the eye of the storm, literally. I thought it apt to make some observations about prevention measures that could be taken to alleviate some of the carnage.

First of all:
What is a hurricane? Hurricane standards are measured against the Saffir-Simpson hurricane scale and are broken into five broad categories based on wind speed and storm surge.

According to definition: A category one hurricane will cause: Damage to shrubs, trees, unanchored mobile homes, and flooding of coastal roads  A category five hurricane is generally considered the fist of God hammering down on you, not much survives.

Earl was a category one hurricane, yet when it made landfall yesterday it did damage that might be better described as a category 3 hurricane: "Structural damage to small residences and utility buildings, large trees blown down, mobile structures destroyed."

It means you are in serous trouble if another bigger blow comes along.

I will  examine some of the damage we witnessed and comment on possible remediation strategies: Rather than assume the people of Belize have unlimited budgets and they don't, I am going to start with some small steps that can be taken and would likely pay off. 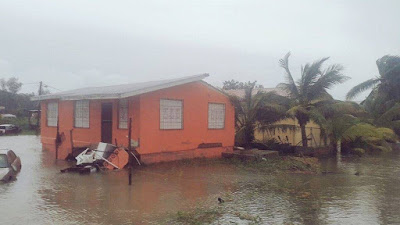 Lets start with this house:  Pretty typical Belize house, concrete block walls stood up well, gable roof however did not. It appears the roof was not adequately attached to the wall structure:  Solution $50.00 worth of hurricane ties on the rafters. 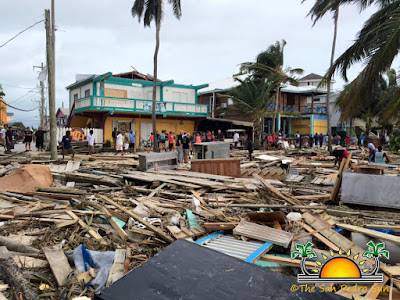 If you look at the green and white building you will see what's left of the gable roof. The building itself was adequately protected with plywood on the windows, which likely saved it from further damage, but a gable roof has about a 70% greater likelihood of blowing off from  than a hip roof; when repaired, the owner should install a hip roof even though it costs a bit more. Right now the people who live on the second floor are homeless. This picture and most of the ones that follow are from San Pedro on Ambergris Caye. 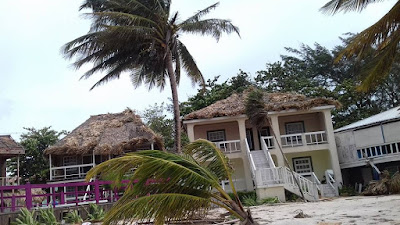 Note the stark contract between the last picture and these two buildings on the same beach: A hip roof WILL survive a class one hurricane. As these are very simple and somewhat traditional thatch roof installations, likely over a frame structure, this building is very easy and inexpensive to restore. Most of the damage to this structure appears to be from the storm surge and debris hitting the stairs, as the building appears to be concrete, damage is slight. and with minor repair immediately habitable. 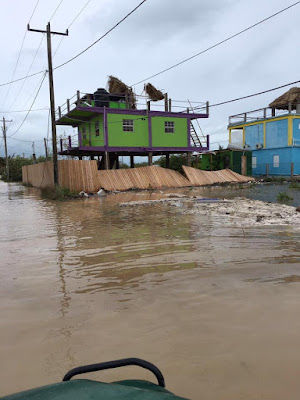 A less robust thatch roof, likely lacking a strong rafter frame, it is so far gone we cannot tell what the original roof design was, none the less, a hip roof should be built. The building was well protected from the storm surge by being stilted. 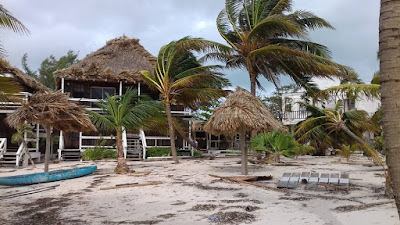 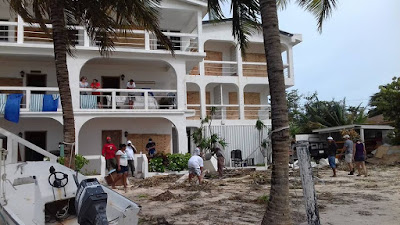 This building was well protected with plywood on the windows, aside from considerable debris, all of which has the potential to be a projectile, the gable is small and the roof held up well, it appears to be either a standing seam roof with hidden fasteners or a clay tile roof, based on the colour I'm guessing standing seam steel. 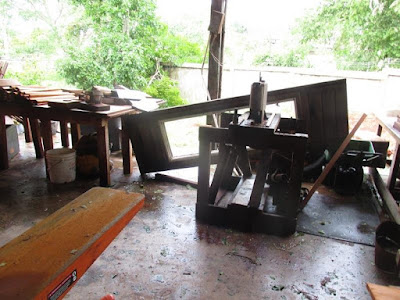 Random penetration and virtually total failure of the front of the house. 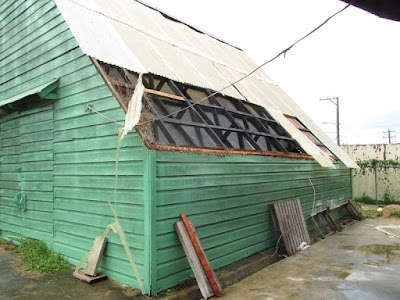 The owner indicated  that this was a new roof installation, it would appear the excessive unsupported overhang at the bottom contributed to the sheet metal roof failure. As this buildings gables are framed with lap siding, they offered sufficient rigidity to protect the structure, despite their size. The rafters of this frame building are also obviously well nailed to the walls.  Had the bottom of the sheets of tin been supported this building could have easily escaped unscathed. 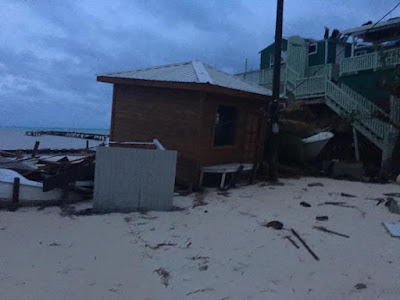 If there was ever an argument in favour of a hip roof, this is it, the little building  has been completely displaced from it's foundation yet the roof  is intact, which might be small comfort to the owner, but a good lesson for others. 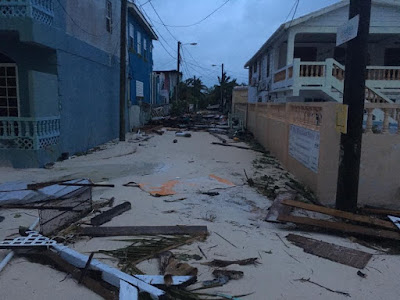 Note the piles of projectiles, during the blow this stuff is either flying around or moving around in the storm surge, all of it represents failure in construction and primarily a lack of structural integrity. It appears there is signage as well as some railings in the front view. That stuff hits you, it's gonna hurt. 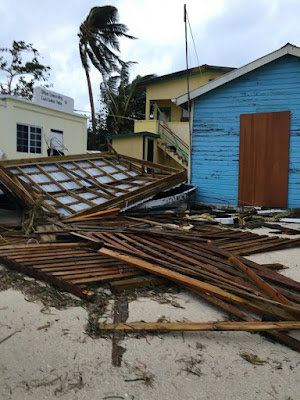 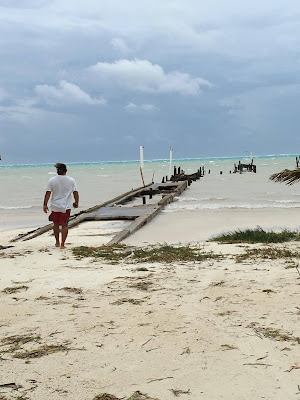 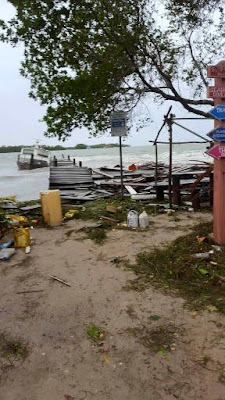 We could call this Pier Pressure.  The damage to these structures is as a result of the storm surge waves building up under the pier and lifting sections out. In design, consideration needs to be given to building failure in by reducing the number of fasteners or physically removing every third dock board at the first indication of a storm.  Give the water an easy way out and it will take it. The boat in the second picture is an amazingly rusty old tub that has been moored in Placentia as long as I can remember, since it didn't sink, I think I will buy it. There used to be a diver shop in the foreground. 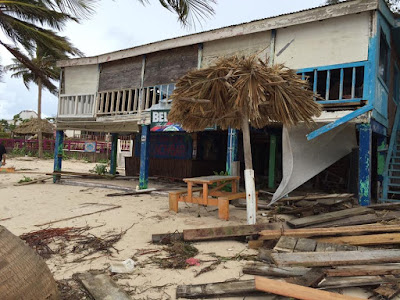 All that pier lumber moved around by the ocean had to go someplace, it appears to have penetrated this building in several places. This wood frame on concrete pilings building is decidedly out of square as a result of the blow. I've been in this bar, it wasn't wobbly before, even if I thought it was by the time I left. 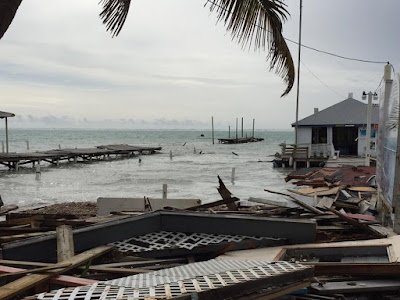 The hip roof dive shop looks in pretty good shape, hard to tell since the lack of surge provision on the piers virtually made it an island unto itself. 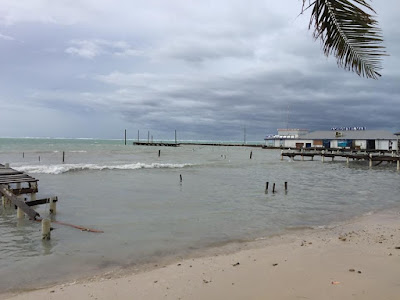 Idyllic scene, until you turn around. 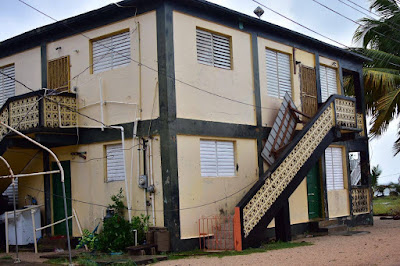 The successes can be as interesting as failures. This building did everything it was supposded to do very well, good quality construction and adequate storm shutters. 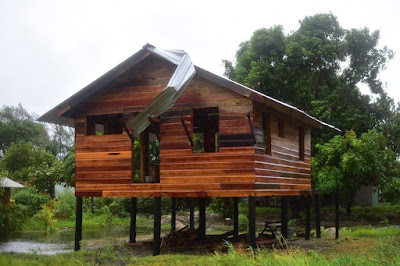 This is what they call a Mennonite house; the Mennonites build these cute little bungalows ands set them on stilts both for flooding and to get a cooling breeze underneath, unfortunately, this one suffered damage before it was even finished.  Because it was damaged on the gable end, it is likely this is a wind pressure failure. Note the stain pattern for the walls, you can see the force the wind took as it pushed against the gable. When I move to Belize I will live in a house made of sea cans on stilts. 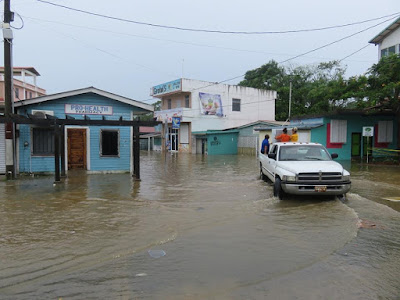 This is San Ignacio town, this particular spot is about 20 feet above the normal level of the Macal river, the combined impact of being near the bottom a slope, inadequate drains the water having no way to escape.  The structures themselves are probably going to be ok, I sure hope so because that pharmacy sells OTC generic Viagra for $5.00 Bze. a pill, "I wanna rock and roll all night and party every day" or so I heard. 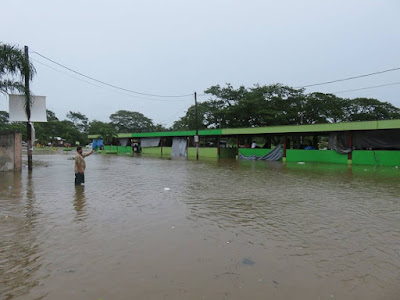 This is the San Ignacio market, it is at the bottom of a series of impressive hills and is about 12 feet above the river. The bridge into town is about five feet lower than this location which suggests it was impassable. There is another bridge of greater elevation that should be ok for access.

San Ignacio, is the most westerly town in Belize, it is located in a valley between the Maya mountains and the Yalbac hills, (more or less). The Mopan and Macal rivers meet just north of town to form the Belize river, which eventually becomes a navigable transportation route. Upstream on the Macal are two major dams designed for both power generation and flood mitigation. an unprecedented twelve inches of rain fell, raising both  reservoirs to flood level.  A lack of adequate drainage in town, if such a thing could credibly exist, contributed to the flooding by pushing the water through the town center.

Like a fire scene or a head wound, the situation often looks much worse than it is, but still this is  fair warning of the power of a class one hurricane.
When you decide to come here to live or buy a vacation rental, look long and hard about what your weaknesses are in the case of a storm.

Better yet, get your purchase inspected, by me!

Thanks to my friend Kate Corrigan and Macarena Rose of Keller Williams  Real Estate and those great souls at LOVE FM, for the pictures. If I happened to have used yours from Facebook, please let me know and I will include you in the credits.